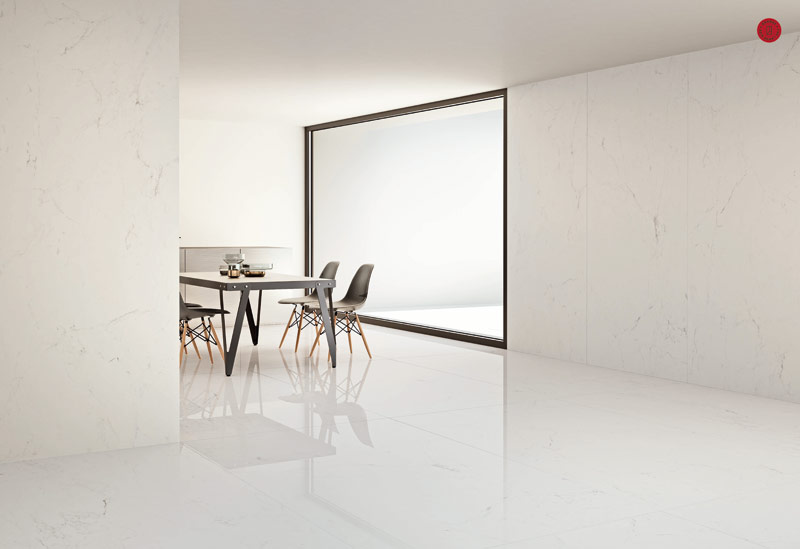 1. Drawing the design on the panes. Set two sawhorses about 4 feet apart to provide a steady base, and put the 3 ½ -by-8-foot plywood panel on them with its smoother side facing upward. Make tick marks denoting the ends of grid lines at 6-inch intervals around all four edges of the panel. Use a piece of chalk and the factory-cut edge of the remaining 8-foot-long strip of plywood as a straightedge to draw the grid lines with chalk. Then, using the scale drawing on Materials for A trellis to create an illusion of spaceas a guide, transfer the design onto the panel, beginning at the top with the tower design. Draw with a pencil to distinguish the lines of the design from those of the grid; to ensure correct line spacing, lay a piece of lath either 1 1/8 inches wide or 1 1/8 inches wide as appropriate in the position called for by the design, and draw lines on both sides of it.

2. Cutting out the tower pattern. Fit a saber saw with a ¼ -inch plywood blade (Tool for outdoor projects), and set the cutting edge of the blade against the upper pencil line four squares from the top at one side of the panel. While a helper holds the corner there to prevent the plywood from splitting, cut along the pencil lines delineating the outer edge of the tower stopping the saw and starting a new cut from an edge as necessary.

3. Cutting lath strips. One strip at a time, measure, mark, cut and nail the lath in the sequence indicated in Step 4, beginning with the 1 1/8 inch lath that will form parts of the outside frame of the trellis. To prevent the lath from splitting when cut, lay the piece flat in a miter box and push it against the far side, aligning your mark with the 90? slots of the box. Hold the lath tight and cut it with a backsaw. The drawings below indicate where horizontal strips butt against vertical ones and vice versa, and thus are a guide to the length of each strip. Add a little extra length to the diagonals so you can trim them easily in Step 5.

4. Nailing the lath. Follow the lettered sequence at right to nail the lath strips one at a time as you cut them (Step 3) to the panel and to one another with 7/8 inch galvanized-steel brads placed at the ends and at 6-inch intervals in between. First, attach the horizontal and vertical strips marking the outer edges of the trellis and tower, then those marking the inner edges (A). Attach the vertical strips within the trellis and the illusory door (B). Attach the horizontal strips of the door and illusory walkway (C). Attach the diagonal strips of the walkway. Trellis and tower (D). For a smooth finish at the top of the tower, nail 2 ½ -inch-long pieces of lath, called mounting blocks, onto the uppermost pair of horizontal strips where they meet the slightly angled tower sides. Finally, nail a second layer of lath to the outer and inner edges of the trellis and to the tower sides. (E).

5. Sawing off exterior lath ends.Place the backsaw across an overhanging lath, setting the side of the saw blade flush against the edge of the panel. Cut the lathe with a single, steady backward stroke, applying light pressure to the saw. Take care not to shave or gouge the panel. Trim all of the other overhanging lath ends similarly.

6. Trimming interior lath ends.Place the blade of a wood chisel across one of the protruding lath ends inside the design. Hold the chisel firmly upright and lightly tap the top of the handle with a hammer until the blade cuts cleanly through the lath. Trim other protruding ends similarly.

7. Filling gaps.To conceal a gap where lath strips meet. First place a small glob of vinyl spackling paste on the tip of a putty knife. Carefully force the paste into the gap and draw the knife across the surface to level it. Fill each gap in the same way. Let the spackling paste dry for several hours.

8. Touching up the paint.Using a 1-inch nylon brush, coat the exposed exterior ends of lath with white exterior flat latex paint. Before painting the exposed interior edges or the patches of spackling paste, cover the adjacent parts of the panel with masking tape. Let the paint dry for two to three hours before removing the tape.

9. Mounting the panel.Stack bricks, concrete blocks or scrap lumber against the fence to form a broad, steady platform 8 inches high where you plan to attach the panel. With the aid of a helper, stand the panel on the platform. Use a carpenter’s level to straighten the panel until it is exactly vertical. Then hold the panel in place while your helper drives sixpenny galvanized steel nails into the plywood at the top corners between the lath. Then nail the bottom corners and finally drive nails at 2-foot intervals along each side.

10. Extending horizontal strips along the fence.Approximately 2 inches from each end of a 4-foot-long strip of 1 1/8 –inch lath, start a 7/8 –inch galvanized-steel brad by hammering it partway into the wood. Set the strip on the fence with one end flush against the first angled strip below the tower design of the panel; drive the brad there through the lath and into the fence. Then set the carpenter’s level on top of the other end of the lath. Adjust the lath until it is exactly horizontal before driving in the second brad. Repeat this process to attach all fo the remaining horizontals.

11. Nailing intersecting verticals.Starting at one side of the panel, make tick marks at 1-foot intervals along the top and bottom horizontal lath strips. Align the outside edge of a vertical lath with the set of marks nearest the panes, and bottom strips with 7/8 –inch brads. Do the same with the remaining verticals. Then go back and anchor all of the verticals firmly by driving a brad into each intersection.

Everything You Need To Know About LED Christmas Lights

What Are The Different Types Of Popular Chandelier...

What Are LED Surface Mount Downlight

Adjustable downlights- What you should know before getting...

Everything You Need To Know About LED Christmas...

No comments to show.